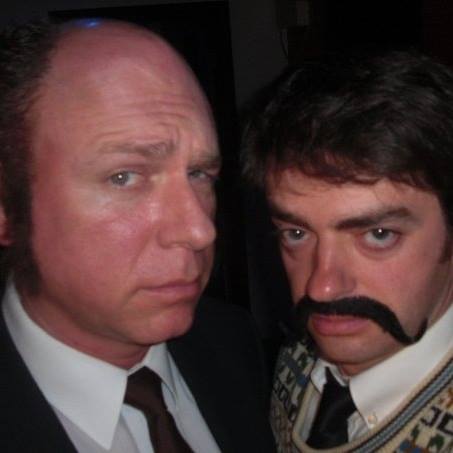 Why I Go To Canada in the Summer...

Every August I travel from Graz to my hometown of Edmonton, Canada to play in the Fringe Theatre Festival. This is a massive event. There were 240 productions put on in ten days, from 12 noon to midnight, in 39 venues mostly concentrated in the neighbourhood I grew up in. Venues are many and varied: theatres, jazz clubs, school gyms, churches, warehouses, dance studios, and this year, someone’s balcony. On the festival site, there are street performers, food trucks, artists, buskers and of course, massive beer and wine tents to meet with friends and talk about the shows and life.

The Fringe has a simple path of entry by way of a lottery system selecting who gets to perform, and artists can do whatever they want with their time slots. That allows artists to indulge in their personal artistic impulses, their bizarre ideas, and/or to create a show that they think will lure audiences in.

I have been performing at the Festival since 1990, reaching MAXIMUM PERFORMANCE FREQUENCY in the mid 90’s with 44 perfomances in ten days. This year I took it easy and only played 18 shows ... plus two Hold-Over bonus shows after the festival.

Gordon’s Big Bald Head is my favourite show to perform, and we’ve played at every Fringe for 27 years. Three of us on stage take the Fringe Festival Program to choose another show at random, read that show’s description and then improvise our version of it. One story for one hour, multiple characters each and no limit to jumping through time and space. My partners/best friends/brothers Mark Meer and Ron Pederson are incredible improvisers; fearless, funny and brilliant at balancing the writing/directing/acting that we use to create the work.

Die-Nasty is an improvised Soap Opera that plays every night at the festival, and the setting is the festival itself. Anything that is relevant to the festival, the city, the country, or to us personally is fair game, and the story continues night after night. My job is to show up in a costume, with a character who has a reason to be there, and play. This year, I was inspired by a little wooden Pinocchio doll I found in a shop. I named him Peppito, and played an Italian puppeteer named Gianni BuonGiovi.  I needed to play someone loud and boisterous, to combat my blissful exhaustion from seeing and playing so many shows.

The Big Stupid Improv Show is a chance for improvisers at the festival to play together. We play Super Scene, where several stories are started but only allowed to continue if the audience wants it. The mix of players is always fresh and exciting, and I get to play with old friends and new.

I also wrote jokes for The Late Night Cabaret, and played a corpse in one performance of Tom Stoppard’s The Real Inspector Hound.

On top of performing 20 shows, I managed to go see 12 other productions, including simple and dark plays, hilarious storytelling, improv with a computer AI system, cabaret shows, and several one man shows like One Man Walking Dead, One Man Stranger Things, and a one-man horror improv show.

My first theatre company Rapid Fire Theatre, produced 13 shows this Fringe, and over 100 performances. I am amazed to see how well RFT is doing. From one show a week in the early 90’s, and heavily in debt, RFT has grown into a powerful Juggernaut of comedy, and Edmonton’s first choice for improv.

Of course, I go home in the summer to see my family and friends, but to go during the Fringe means I also experience a high concentration of theatre. Ten days and hundreds of opportunities to see something new. I see my peers and even some of my family on stage, taking risks and elating audiences.

As an Improviser, I can meet someone for the first time on stage and create something special. We all speak the same language. When I play with my long time friends, it’s comfortable, yet I know that we will also push eachother into new territory, challenging our storytelling skills, thrilling each other and the audience.

So if you need me during August, I’ll be in Edmonton.